No Justice, No Peace! Portraits of Protest, by Photographer Ocean Morissett 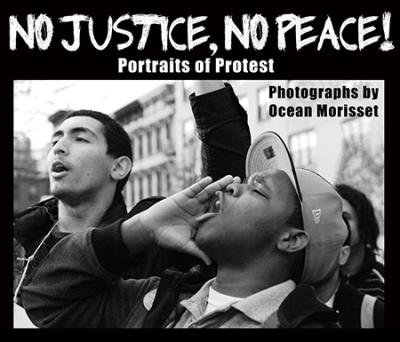 (CROTON, NY) The Croton Library is pleased to present a new exhibition of Photographs by award-winning Photographer Ocean Morisset, from his ongoing series of protest photographs titled No Justice, No Peace!

No Justice, No Peace!, is an exhibition of striking black and white photography, mostly portraits, capturing the raw emotion and power of everyday American citizens exercising their First Amendment right; Freedom of Peaceful Assembly, at protests, demonstrations and rallies, that have erupted in the streets of New York City over the last decade.

The photograph has long been instrumental to the act of protest. In an era that has been consumed by issues of police brutality, gentrification, gay and lesbian rights, and reproductive rights, Ocean has joined the long tradition of photojournalists, documenting these social movements for the historical record. More than visual documentation, however, Ocean’s work reflects his activism in the social struggles of the day and not simply a form of witnessing.

“Free assembly is a human right, and as universal as voting or free speech. At a time when legislators in nearly twenty states proposed bills that would restrict people’s right to protest, it’s not only important to exercise my First Amendment right, but also to record for history these social movements. This is not just about protesting, but it’s an engagement with what it means to be a human being. My goal is to tell the story of outrage and injustices through the emotion of those taking part in the struggle, and making my own voice heard through the photographs. Inspired by my photography hero Mr. Gordon Parks, my camera is my choice of weapon for fighting for human rights.”

In December 2019, Ocean Morisset, a resident of Peekskill, was named one of the “Seven Hudson Valley Artists to Watch” by Chronogram Magazine. He is the inaugural winner of the Larry Salley Photography Award presented by ArtsWestchester in 2017, and the inaugural Mel Tapley award presented by the Peekskill Chapter of the NAACP in 2018. This is his first exhibition at the Croton Library’s Ottinger Art Gallery.

Stay Up to Date!

Get the latest updates about what’s happening at the Library.
Get Our Newsletter