The mission of the Croton Free Library is to encourage the joy of reading, the exploration of ideas and the pursuit of lifelong learning for the children and adults of our community.

Books, media, and state-of-the-art technology help us provide free and equal access to knowledge, information, and a wide range of artistic expression.

The Library serves as a gathering place and learning center for Croton residents, with dynamic cultural and educational programs, and space for community organizations to meet.

In 1937, FDR began his second term in office, the Hindenberg exploded, Walt Disney’s Snow White and the Seven Dwarfs premiered and the Croton Free Library was born.

Although the official founding was in 1937, the core collection was formed more than a decade earlier, when a group of individuals started the Croton-Harmon Community Book Club and began informally circulating approximately 1,000 books.

By the summer of 1937, three local civic groups, the Croton-Harmon Community Book Club, the Croton Recreation Club and the Croton League, decided that the village needed a proper library and an appeal was made to the community for more books.

On a Sunday afternoon that fall, a house-to-house pick-up was organized, netting an additional 1,000 books. Within a few weeks, a part-time librarian was hired and the 2,000 volume library was housed in a small room in Croton-Harmon High School.

By January of the following year, the trustees of the young library were holding their first annual meeting and planning a membership drive. The Croton-on-Hudson News reported that “there was an average monthly circulation of 648 volumes. This amount . . . seemed very good, considering that the library was opened only 18 hours per week.” The paper went on to say that an inspector from the State Library Board had “praised the excellent selection of books” during a recent visit.

The inspector’s visit was an important first step in a formal process by which the library applied for a permanent charter from the New York State Board of Regents, which was granted in 1948. Although most residents today might assume that the library is part of the municipal government, it is an “association library,” defined as a private corporation established by the members of an association, which has a contract with a unit of local government to provide library service. The Croton Free Library is one of 11 association libraries in Westchester County.

In 1939, construction of the Pierre Van Cortlandt School was completed, and in the following year, the old school was sold to the village and became what is known today as the Municipal Building. In addition to housing the village offices and police department, the municipal building contained the library, which was located in a former kindergarten classroom. The library remained in the municipal building for the next 25 years.

As the village grew in the post-war years, the library grew with it. By the late 1950s, trustees decided that it was time to build a permanent home for the library. The president of the board of trustees noted that the Municipal Building had “become increasingly cramped . . . many books are kept in the Recreation Department archery range.”

Before long, the construction of the new library was a community effort. Most of the funds came from a bequest made by Robert Watson, in memory of his wife, Ola Smith Watson, one of the original organizers of the library. Some of the land was donated by Vicenzo Delia and the rest was purchased using private funds. After construction started in 1964, a fundraising drive began to raise an additional $75,000 needed for completion. The effort was kicked off with an anonymous $10,000 “challenge grant,” later revealed to have been made by Lila Acheson Wallace, one of the founders of Reader’s Digest.

Reporting on the dedication of the new library building in March, 1965, The Croton-Cortlandt News made a statement that is still true today, “the Croton Free Library is a completely home-built, home-operated facility and the community pride in it need know no bounds.” 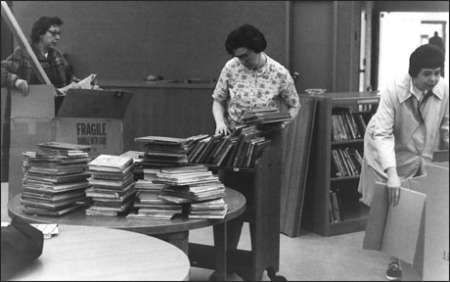 Stay Up to Date!

Get the latest updates about what’s happening at the Library.
Get Our Newsletter